The first shot shall be decided upon drawing lots between two players and shall be made with the white ball against the balls, placed in the triangle... 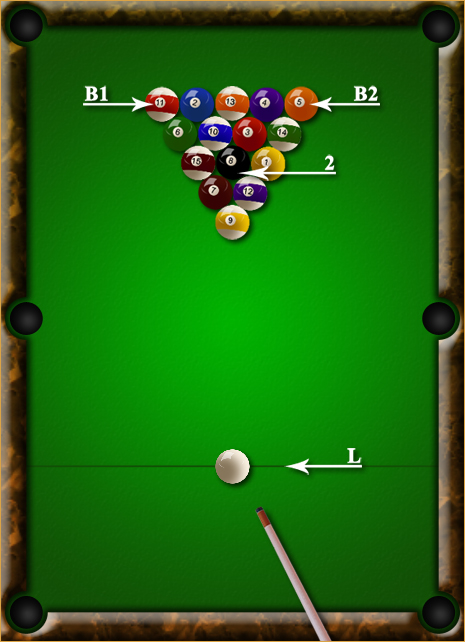 The first shot shall be decided upon drawing lots between two players and shall be made with the white ball against the balls, placed in the triangle; what is more, the player makes the shot, being situated in the front zone.

The first shot is considered to be made, when the balls have been moved from their starting position and at least two, except the white ball, have touched the side or any of the balls has been pocketed. If it has not happened, the opponent may continue the game from the current position or to place the balls in the triangle and start over the game.

After the first shot the balls are chosen. The player chooses the balls of the group which he/she considers more advantageous. Upon choosing, any type of combination might be used in order to hit the first chosen ball surely in the indicated pocket. The choice has been made when the player has pocketed the first indicated ball. Afterwards the player pockets only the balls of the chosen group.

- During the game all the shots are made only with the white ball. The shot might be performed from any side of the table, from the position where the white ball has stopped after the previous shot, except the shots "in hand". (See P.5. "Penalties and fouls").
- Before each shot the player must announce which ball and in which pocket he/she will hit.
- If the player does not pocket any of the balls of his/her group or commits a foul or penalty, the shot goes over to the opponent.
- The black ball shall be pocketed as the last one - after all other balls have been pocketed. Before the shot against the black ball, the player has to announce in which pocket he/she will hit. This has to be done every time the black ball is hit, till the end of the game. Any pocket might be announced, also the one which was announced by the opponent during the previous shot.
- The game is won, if the player pockets the black ball without a foul or penalty after all other balls of his/her group have been pocketed.

Penalty - a position in the game, when the rights to a shot are given over to the opponent and he/she may perform a "shot in hand", that is to place the white ball in any place of the square.

Penalties are, if:
- the white ball touches first the opponent's ball or the black ball;
- the white ball does not touch any ball;
- The white ball is pocketed or jumps off the table; (also during the first shot)
- The player touches any ball, situated on the table, with hand, cue or clothes.

Foul - a position in the game, when the rights to a shot go over to the opponent, but the shot has to be made from the place, where the white ball has stopped.

A foul is, if:
- the indicated ball is shot not in the announced but in any other pocket;
- any ball (except the white or black) jumps off the table; such ball shall be placed next to the middle point of the side from where it jumped off.

- during the game the black ball jumps off the side or is pocketed too early (it does not apply for the first shot);
- The black ball is hit in another pocket, not in the announced one;
- By pocketing the black ball, the foul or penalty has been committed.

It is possible to play billiards at these Olympic Casino slot casinos: