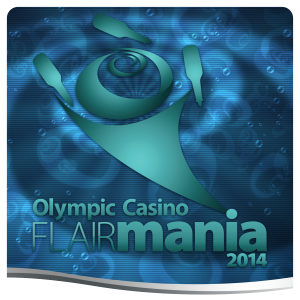 On 16 January 2014 a competition between the world’s best flair bartenders will take place in the premises of Olympic Voodoo Casino, gathering a record number of participants.

On 16 January 2014, for the fourth year already, a competition among the world’s best flair bartenders Olympic Casino Flairmania 2014, in which 60 contestants from 23 countries and four continents will participate, will take place in the premises of Olympic Voodoo Casino at Radisson Blu Hotel Latvia. It is worth noting that all 60 places in the competition were filled in the first 24 hours and a waiting list of several tens of prospective contestants was formed, in case anyone backed out. This year, for the first time, women – four of them – will also participate in the contest and compete amongst themselves for the newly created Flairmania Supergirl title.

The word “flair” does not have a direct translation in Latvian, but to the wider public it is known as a bartender art show where they perform acrobatic demonstrations with bottles, glasses and other components during the cocktail making process, in an attractive way.

Andrejs Jerkins, Olympic Casino Latvia Marketing and Service Development Manager: “Flairmania was born four years ago as an idea for a cool event. Back then nobody could even imagine that it would become not only a tradition but also one of the most interesting bartender competitions in the world. These are not just words – we can see growth not only in the number of participants and countries they represent, but also in the number of professionals of the field who come here for new ideas. In 2013 we presented a unique point counting system that enabled us to follow each participant’s success online. Until then no one else had done it. This year we will introduce novelties in other spheres. I would also like to note that the prize fund has been increased.”

Raitis Akerblūms, president of the Latvian Bartender Federation: “With each year not only the number of contestants but also our responsibility is growing, to ensure that the event is a success. In fact, this has become the most innovative competition, each year surprising the bartender community with something new. Therefore this year we also have something special in mind. All I can say about it at the moment is that many people will be wondering why nobody thought of it sooner. This year four girls will also be participating in the competition which will be an interesting experience not only for them, but also for the guys who are used to competing amongst themselves only. I invite everyone to come and watch the world’s best bartenders at Olympic Voodoo Casino on 16 January at 10:00 in the morning, when the elimination rounds begin."

A flair bartender competition of such an international scale will be taking place in Latvia for the fourth time already, and each year it is attracting even more participants. Last year Tomek Malek from Poland was proclaimed the best participant of Olympic Casino Flairmania 2013. This year the competition for prizes will be especially intense as all the winners of previous years will be participating. Marek Posluszny (Poland), the International Bartenders Association’s 2013 rating leader and world champion, Alexander Shtifanov from Russia, whose performance has more than 17 million views on YouTube, Marco Corgnati from Italy who is one of the oldest practitioners of flair bartenders, as well as guests from faraway Argentina and Japan can be singled out among the other competitors.

Latvia’s biggest hope in this year’s competition is the 19-year-old Deniss Trifanovs who last year already demonstrated his talent with an impeccable performance and high positions in several competitions outside Latvia.

This year the competition’s prize fund is EUR 6100. A jury of internationally acclaimed judges – Timppa Nyyssonen from Finland, Jay du Toit from Great Britain and Gianluigi Bosco from Italy – will make sure it is distributed fairly. To professionally evaluate the taste of the cocktails, a special tasting jury has been created consisting of knowledgeable Latvian and Estonian cocktail experts and Roman Toroshin, the cocktail syrup brand Monin’s representative in Russia. The competition will be hosted by one of the best Latvian bartenders Ansis Ancovs.

The general sponsor of Olympic Casino Flairmania 2014 is Olympic Casino, and the informative sponsor – www.bartending.lv. The competition is organised in cooperation with the Latvian Bartenders Federation and is an official stage of the Grand Slam rating competition among the world’s best bartenders organised by the World Flair Association. LIVE video broadcast of the event: www.bartending.lv. Additional information about Flairmania: www.flairmania.com

A press conference dedicated to the event will take place on 13 January, 12:00 at Olympic Voodoo Casino.

As of 30 September 2013, OEG in Latvia owned 1001 gaming machines and 18 gaming tables. At the end of September 2013 OEG in Latvia employed 662 workers. Olympic Casino Latvia is a socially responsible enterprise whose activity has been appraised by it’s inclusion in Sustainability Index’s Gold category and in the so-called State Revenue Service’s “white list”

About the Latvian Bartenders Federation:

The Latvian Bartenders Federation is the largest organisation in the sector which unites Latvian bartenders with the aim to raise their professional qualification. Members of the Latvian Bartenders Federation are the leading professionals in the sector, and under the leadership of its president Raitis Akerblūms, the federation has organised many public competitions, seminars and other events related to bar and drinking culture.