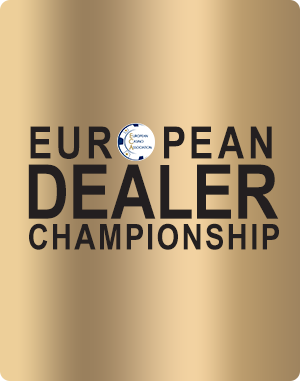 This week in the European Dealer Championship held in London a representative from Olympic Casino in Latvia Antra Gaike-Mica has won the first place.

European Dealer Championship is organised by European Casino Association. This year the event was held from May 8-10 in United Kingdom’s largest Hippodrome Casino, gathering 33 participants from 21 countries. Performance of the competitors was evaluated in 3 main categories: technical skills, control of the game and hospitality, allowing participants to prove their skills in 2 of the most popular casino table games: American Roulette and Blackjack. Dealer of “Olympic Voodoo Casino” Antra Gaike-Mica managed to show best of her abilities and was pronounced as the top dealer in Europe by a 31 member jury.

Gints Pakarklis, Chairman of the Board  of “Olympic Casino Latvia”: “We are happy and proud of Antra’s achievement, that she has earned a status of being best among the best. The significance of this fact can not be overstated since European Dealer Championship is the most prestigious competition of our gaming professionals in Europe. We have always been encouraging and supporting our employees pursuing the toughest challenges, professional or otherwise, and Antra’s success boosts our dedication to continue doing so.

Antra Gaike-Mica, Dealer at “Olympic Voodoo Casino”: “Just when it turned out that I will be one of those representing Latvia in London, deep down I knew I will be bringing that Cup home. The confidence was there, the only thing that could go wrong was too much stress. During preparation I polished my technical skills as I was sure about the rest, really had no doubts. As the competition started, I managed to get just that right feeling of flow – that everything is possible, and it worked! I am grateful for my support team that came with me to London as well as my family that supported me from Latvia.”