For the eighth time in a row, Riga to host one of the world’s most prestigious bartending competitions, Flairmania 2018 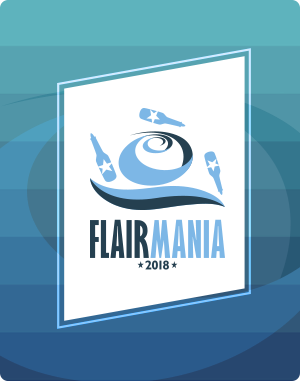 Flairmania 2018, a competition featuring the best flair bartenders in the world, will take place at Olympic Voodoo Casino, located in Radisson Blu Hotel Latvija, on January 25, 2018. A total of 60 bartenders from 22 countries will participate in the first round of the competition that starts at 10 a.m. The ten best bartenders will go to the final that starts at 9 p.m. Also participating in the competition will be six female bartenders, including one who has come to Latvia all the way from Japan. The girls will be competing for the Flairmania Supergirl 2018 title.

There is no generally accepted translation for “Flair" in Latvian, but the public has come to know it as a show where bartenders do dazzling acrobatic tricks involving bottles, glasses and other bar tools as they are making a cocktail.

Andrejs Jerkins, Head of Marketing and Service Development at Olympic Casino Latvia: “The Flairmania competition has been making more headlines every year, and the number of live streams of the event has been rising in Latvia and elsewhere in the world. Likewise, the number of participants in the competition has been increasing steadily, and this year 22 countries will be represented at the competition. During the registrations, all 60 applications were filled out in just half-a-minute! This proves once again that Latvia can successfully organize world-class entertainment events.”

Raitis Akerblūms, President of the Latvian Bartenders Federation: “The entire bartender community of Latvia is proud to see Riga become, for one night every year, the world capital of bartending. This is not only a show featuring the best bartenders, but also an important event for the entire industry, and we can be proud that it takes place here in Riga.”

This is the eighth time the international flair bartending competition is held in Latvia, and the number of participants has been growing steadily each year. Last year, Deniss Trifanovs, of Latvia, was honored as the best participant in Flairmania 2017. This year, Latvia will be represented by five bartenders – the experienced Deniss Trifanovs, the winner of the 2015 and 2017 competitions, as well as bartenders Romāns Kovaļenoks, Linards Grundmans, Kaspars Beinarovičs and Gļebs Fonarjovs.

The competition’s prize fund is EUR 6,000. How much the winners take home will be decided by an impartial jury comprised of Tom Duyer and Jay du Toit from Great Britain, as well as Timppa Nyyssonen from Finland. A new and welcome addition this year – jury member Lelde Lietaviete who will be judging the attractiveness and key features of each performance. One of the best bartenders and most magnetic entertainers in Latvia, Ansis Ancovs will host the show.

Olympic Casino Latvia is the general sponsor of Flairmania 2018. The competition is organized in cooperation with the Latvian Bartenders Federation and the event is part of the World Flair Association’s Grand Slam. The competition will be streamed live on www.bartending.lv. For more information about Flairmania, visit www.flairmania.com

2017, OEG employed 914 people in Latvia. Olympic Casino Latvia is a socially responsible company, a fact acknowledged by the company’s inclusion in the Gold Category of the Sustainability Index and in the Whitelist of the State Revenue Service.

The Latvian Bartenders Federation is the leading organization representing Latvia’s bartenders, and its main objective is to help bartenders improve their qualifications. The Latvian Bartenders Federation has been a member of the International Bartenders Association since 2014. Leading industry professionals are members of the Federation that, under President Raitis Akerblūms, has organized a number of public competitions, seminars, and other events to popularize the culture of cocktails in Latvia.