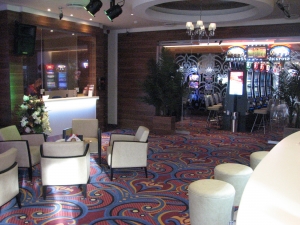 New entertainment place has entered stage on February 21st in Daugavpils when a second Olympic Casino has been opened in the heart of the city on Saknu street 15. Grand opening party rocked the casino with live music, magicians, dancers and a DJ until late night.

New casino has a spacious OlyBet Sports Bar with wide range of sports TV channels as well as a 2x2 large screen making it possible the best place in town to watch sports with friends. Additionally, regular live music events will be held several times a month.

Because of the pleasant atmosphere, attractive design and friendly bar prices new casino has already become a hot new spot in Daugavpils with tables often being reserved in advance for most popular sports events.

Another Olympic Casino is located on 18 novembra street 113, which during summer time offers its guests a large outdoor terrace, making it a perfect place to chill after a long working day.

As of 30 September 2013, OEG in Latvia owned 1001 gaming machines and 18 gaming tables. At the end of September 2013 OEG in Latvia employed 662 workers. Olympic Casino Latvia is a socially responsible enterprise whose activity has been appraised by it’s inclusion in Sustainability Index’s Gold category and in the so-called State Revenue Service’s “white list”.