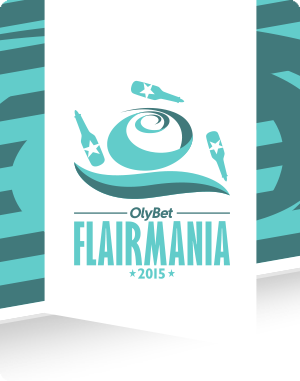 One of the most prestigious bartenders’ competitions in the world – OlyBet Flairmania 2015 - will take place in Riga for the fifth year in a row.

On 15 January 2015 a competition between the world’s best flair bartenders will take place in the premises of Olympic Voodoo Casino, gathering 55 participants from 19 countries.

On 15 January 2015, a competition among the world’s best flair bartenders OlyBet Flairmania 2015, will take place in the premises of Olympic Voodoo Casino at Radisson Blu Hotel Latvia. Already from 10:00 55 participants representing 19 countries will compete in elimination rounds. While, at 21:00 10 best will compete in finals. Women will also participate in the competition and compete amongst themselves for the title „Flairmania Supergirl 2015”.

The word “flair” does not have a direct translation in Latvian, but to the wider public it is known as a bartender art show where they perform acrobatic demonstrations with bottles, glasses and other components during the cocktail making process, in an attractive way.

Andrejs Jerkins, „Olympic Casino Latvia” (OCL) Marketing and Service Development Manager: „In five years competition OlyBet Flairmania has become the Latvian business card in bartending circles throughout the world, as evidenced by the fact that last year viewers from more than 60 countries were watching the live broadcast of the event. Bartenders’ performance videos on YouTube have hundreds of thousands of views, which is an excellent indicator for videos from Latvia. At the same time, this is also an opportunity for Latvian bartenders to watch live elite performances and an extra motivation to improve their skills. Thanks to the support of OCL, show can be visited free of charge and we invite to grasp this opportunity.”.

Raitis Akerblūms, president of the Latvian Bartender Federation: “This year is the 5th anniversary for the competition and I can definitely say that OlyBet Flairmania 2015 now has become the No.1 Flair bartender competition in the world! The proof of this is the fact that this year, after the publication of the competition rules, 60 participants from all over the world registered literally within one hour! It can be likened to a kind of Guinness World Record, as this fact is not even close to similar experiences in the world. I certainly invite everyone to come and watch the world’s best bartenders at Olympic Voodoo Casino on 15 January, already from 10:00 in the morning, when the elimination rounds begin.”.

A flair bartender competition of such an international scale will be taking place in Latvia for the fifth time already, and each year it is attracting even more participants. Last year, for the second year in a row, Tomek Malek from Poland was proclaimed the winner. Among other members the following bartenders can be highlighted: the 2013 World champion Marek Posluszny (Poland); Alexander Shtifanov from Russia, whose performance has more than 17 million views on YouTube; Marco Corgnati from Italy, who is one of the oldest practitioners of flair bartenders; as well as visitors from distant countries - Argentina and the Maldives. It should be noted also that the ladies competition has gained an unprecedented responsiveness this year - by the date of this press release, 8 women have applied for the competition and will compete among themselves for the special title "Flairmania Supergirl 2015".

Latvia’s biggest hope in this year’s competition is the 20-year-old Deniss Trifanovs who last year already demonstrated his talent with an impeccable performance and high positions in several competitions outside Latvia.

The competition’s prize fund is EUR 6100. A jury of internationally acclaimed judges – Andy Collinson from United Kingdom, Timppa Nyyssonen from Finland and Sergiy Sidorenko from Ukraine – will make sure it is distributed fairly.

This year a list of outstanding industry personalities will be included in the Cocktail taste jury: Raimonds Tomsons – the president of the Latvian Association of Sommeliers, Greta Gronholm (Finland) – the champion of the 2013 World Cocktail Championship, Krista Meri (Estonia) – triple champion of the World Cocktail Championship and Ron Busman (The Netherlands) – the president of the International Bartenders Association. The competition will be hosted by one of the best Latvian bartenders Ansis Ancovs.

On the occasion of the 5th anniversary of Olybet Flairmania, the best Latvian cook Raimonds Zomers will welcome the world's best bartenders for gala dinner in the restaurant "Kaļķu vārti" on 14 January.

The general sponsor of OlyBet Flairmania 2015 is „Olympic Casino Latvia“, and the informative sponsor – www.bartending.lv. The competition is organised in cooperation with the Latvian Bartenders Federation and is an official stage of the Grand Slam rating competition among the world’s best flair bartenders. LIVE video broadcast of the event: www.bartending.lv. Additional information about Flairmania: www.flairmania.com

As of the end of 2043, OEG in Latvia owned 1059 gaming machines and 27 gaming tables. OEG employs 680 workers and is a socially responsible enterprise whose activity has been appraised by it’s inclusion in Sustainability Index’s Gold category and in the so-called State Revenue Service’s “white list”

About the Latvian Bartenders Federation