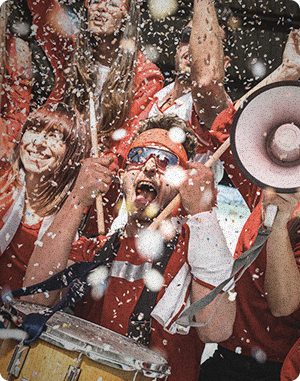 This is the fifth time that a football fan tent has been installed in honour of the world's largest sporting event - the FIFA World Cup in the heart of the capital city, in the square near the Congress Hall of Riga. During the whole tournament until 15 July, everyone is invited to participate in various activities, watch the games and just come and root for the best players in the world.

To inspire football fans to not only actively support the world's football stars, but also to not be afraid to go out onto the pitch, during the opening event of the tent musicians from the group "Dziļi violets", actor and musician Kristians Kareļins, journalists Edgars Barbaks and Oskars Lepers, operator Sandis Polis, musician Atis Zviedris, actors Toms Veličko and Pauls Iklāvs, and even football superstar Cristiano Ronaldo's look-alike competed in mini-football tournaments with indoor and classic football stars - Mihails Zemļinskis, Aleksandrs Dibrivnijs and Vitālijs Astafjevs. Significantly, unlike the World Cup football games that we have been able to follow since 14 June, in the matches of this tournament, despite some fierce battles - friendship won. The most points were scored by native Ronaldo look-alike Jānis Pakalns, and as the participants themselves revealed after the tournament - the games were not only interesting but also brought the players together.

To the delight of football fans, visitors of this year’s fan tent can also participate in a special game and vote for the most striking football star look-alike. Until 28 June, everyone is invited to decide which of the two native football enthusiasts looks more like the super-stars of world football - Cristiano Ronaldo and Mesut Özil. It is also possible to apply for your participation on OlyBet social networks. The members of the mini-football tournament and the fans also had the opportunity to vote for the most striking counterpart, who, after the games on the fan tent football pitch, actively predicted which countries would reach would reach the final of the competition.