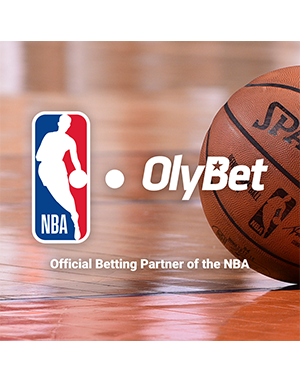 LONDON, July 30, 2020 – Olympic Entertainment Group AS (OEG) and the National Basketball Association (NBA) today announced a new multiyear partnership that will make its flagship betting brand OlyBet the official betting partner of the NBA in the region.

The exclusive partnership, covering Estonia, Latvia, Lithuania and Slovakia, will be promoted in more than 100 casino and retail locations in the region and on OlyBet’s and the NBA’s social and digital assets.  OEG will also become the presenting partner of the NBA’s free-to-play gaming platform, NBA Pick’Em, which will be localised for the region.

“We are thrilled to partner with OEG, a market leader in gaming resorts in the region. The timing of our partnership is ideal, given the unique opportunity in which NBA games will be live in European primetime every day during the seeding stage of the season restart,” said Scott Kaufman-Ross, Senior Vice President, Head of Fantasy & Gaming, NBA.  “Our partnership will give OlyBet the tools to create the most authentic NBA betting experience in the region, providing another way for fans to engage with the NBA.”

“We are incredibly excited to partner with the NBA over the coming years. Lovers of basketball in our markets will now have more opportunities to engage with the NBA through live games and local events, social media and the best betting experiences in Europe,” said Corey Plummer, Chairman and CEO, Olympic Entertainment Group. “The limitless brand power of this partnership compels us to be more ambitious and more innovative than ever before and I look forward to bringing this future to our combined base of customers and fans.”

As part of the partnership, OEG will use official NBA branding across their land-based and digital sports betting offerings throughout Estonia, Latvia, Lithuania and Slovakia.  OEG and the NBA will also work together on best-in-class practices to protect the integrity of NBA games.

The 22 teams participating in the season restart will play eight seeding games each from July 30 – Aug. 14 at ESPN Wide World of Sports Complex at Walt Disney World Resort in Florida.  If a play-in is required to determine the eighth playoff seed in either conference, it will take place Aug. 15-16.  The first round of the 2020 NBA Playoffs will begin on Aug. 17.

Fans in the region can download the official NBA App on iOS and Android for the latest news, updates, scores, stats, schedules and videos and follow the NBA on Instagram at NBAEurope.  Fans can also purchase all the latest NBA merchandise at NBAStore.eu.

About the NBA
The NBA is a global sports and media business built around four professional sports leagues: the National Basketball Association, the Women’s National Basketball Association, the NBA G League and the NBA 2K League.  The NBA has established a major international presence with games and programming in 215 countries and territories in nearly 50 languages, and merchandise for sale in more than 100,000 stores in 100 countries on six continents.  NBA rosters at the start of the 2019-20 season featured 108 international players from 38 countries and territories.  NBA Digital’s assets include NBA TV, NBA.com, the NBA App and NBA League Pass.  The NBA has created one of the largest social media communities in the world, with 1.6 billion likes and followers globally across all league, team, and player platforms.  Through NBA Cares, the league addresses important social issues by working with internationally recognized youth-serving organizations that support education, youth and family development, and health-related causes.

About Olympic Entertainment Group AS
Olympic Entertainment Group is the leading provider of casino and entertainment experiences in the Baltic States (Estonia, Latvia and Lithuania) and operates casinos in Slovakia, Italy and Malta. OEG owns and operates more than 120 gaming and hospitality premises including Hilton Tallinn Park, Voodoo Grill Restaurants and the online and retail gaming brand OlyBet (www.olybet.eu). OlyBet is the #1 online brand in Estonia, Latvia and Lithuania with an offering that includes sports betting, online casino games and poker. Olympic Casino is the premier brand and operator in the Baltic States winning awards for Best European Operator, European Dealer Champion and World’s Best Bartender. OEG is a pioneer and continued leader in responsible gaming practices and an avid sponsor of local communities and sports development programs.