The biggest jackpot in the history of Latvia has been won 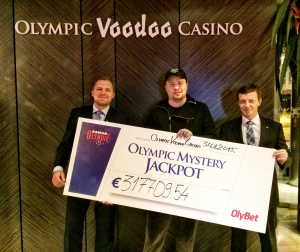 In the afternoon of January 31, in Olympic Voodoo Casino, in Riga, Mystery Jackpot of € 317709,54 has been won on slots machines. The lucky prize winner is 33-year-old citizen of the Russian Federation Igor Harlamov, who is well known for his participation in Russian humor TV shows. Mr Harlamov revealed Olympic Casino Latvia representatives that he had arrived in Latvia for business and visited casino for entertainment. To the message that this is the biggest jackpot ever won on slot machines in Latvia, the lucky winner replied “Perhaps you will not believe, but it is also the biggest in my life!” When asked how he plans to use the substantial amount of money Harlamov replied that now he will be able to pay the loan balance of his house.

Gints Pakārklis, chairman of the board of Olympic Casino Latvia: „I am delighted that Olympic Casino is able to offer the biggest casino jackpots in Latvia and to obtain emotions close to world-class casinos in Las Vegas!

Olympic Mystery Jackpot can be won on any of Olympic Casino Latvia slot machines in Latvia even with a minimum bet of € 0.01.

As of the end of 2014, OEG in Latvia owned 1059 gaming machines and 27 gaming tables. OEG employs 680 workers and is a socially responsible enterprise whose activity has been appraised by it’s inclusion in Sustainability Index’s Gold category and in the so-called State Revenue Service’s “white list”.

Olympic Entertainment Group (OEG) is the largest provider of casino entertainment in Central Europe, it operates casinos in Latvia, Lietuvas, Estonia, Poland, Slovakia, Belarus and Italy, and it employs more than 2600 employees. OEG is a full member of the European Casino Association. OEG shares are traded on the main list of Tallinn Stock Exchange and the Warsaw Stock Exchange.

All casino operators of Olympic Entertainment Group are responsible enterprises that notify their clients of the dangers associated with gambling.

Information was prepared by:

Head of Marketing and Service Development