The world's bartending masters will gather in Riga 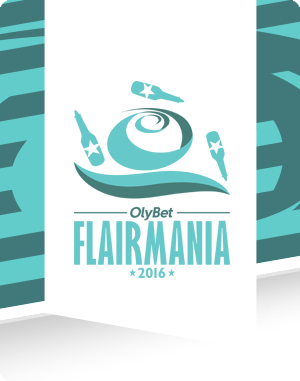 Bartenders Competition will take place in „Olympic Voodoo Casino” premises of the hotel „Radisson Blu Hotel Latvia” already this Thursday, January 21, from 10:00 until midnight. Throughout the day 10 best performers will be selected and on Thursday evening at 21:00 they will present a world class flair show.

The word „flair” does not have a direct translation in Latvian, but to the wider public it is known as a bartender art show where they perform acrobatic demonstrations with bottles, glasses and other components during the cocktail making process, in an attractive way. To prepare for a competition on such level, bartenders have been training for a long period of time, since this kind of discipline requires a high level of athletic training, strength, agility and self-discipline.

Andrejs Jerkins, „Olympic Casino Latvia” (OCL) Marketing and Service Development Manager: „The competition „OlyBet Flairmania” has become a Latvian business card in bartending circles throughout the world in six years. As evidence serves the fact that viewers from over 60 countries were watching the event online. Bartenders performance videos have several hundred thousand views on YouTube, which is a significant indicator for Latvian videos. At the same time this is also an opportunity for Latvian bartenders to watch live elite performances and it is an extra motivation to improve their skills. Thanks to the OCL support, all interested can visit the show free of charge and we invite to grasp this opportunity. ”

Raitis Akerblūms, president of the Latvian Bartender Federation: „I can most certainly say that „OlyBet Flairmania” has become the most popular flair bartenders contest in the world! Popularity showed the fact that the maximum number of participants registered within eight minutes after publishing the contest regulations. It can be likened to a kind of „Guinness World Record” because this kind of activity has not been in bartending competitions in the world.

A wide variety of flair stars, which have proved themselves in a number of prestigious bartending competitions, have applied for participation in the competition this year. For the master bartender title will compete the last year winner, Latvian new talent, Deniss Trifanovs, 2013 World Champion Marek Posluszny from Poland, Aleksandrs Štifanovs from Russia (his performances have more than 17 million views on YouTube), as well as guests from the distant countries - Argentina and Japan. Five ladies have applied for the competition and they will compete for the special prize „Flairmania Supergirl 2016”.

The competition’s prize fund is EUR 6100. A jury of internationally acclaimed judges – Joe du Toit from United Kingdom, Timppa Nyyssonen from Finland and Sergiy Sidorenko from Ukraine – will make sure it is distributed fairly.

The competition will be hosted by one of the best Latvian bartenders Ansis Ancovs.

The general sponsor of „OlyBet Flairmania 2016“ is „Olympic Casino Latvia“, and the informative sponsor – www.bartending.lv. The competition is organized in cooperation with the Latvian Bartenders Federation and is an official stage of the Grand Slam rating competition among the world’s best flair bartenders.

About the Latvian Bartenders Federation