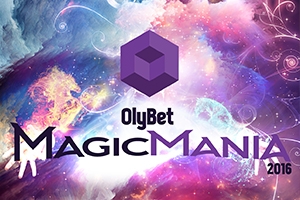 On 7 October 2016, at 19:30, competition between the best illusionists will take place in the premises of Olympic Voodoo Casino in hotel Radisson Blu Latvia, gathering 11 participants from 7 countries.

After successful performances in theaters in China and before going on tour to America, illusionists Pecolli have decided to delight Latvian viewers with a unique event – international illusionist competition „Olybet MagicMania”. The competition will take place in Olympic Voodoo Casino,Elizabetes street55, at 19:30.

For example, a magician from Spain - Ezker - will manipulate with laser beams out of his hands, magic champion from Italy, Matteo Cucchi will perform incredible stunts with horseshoes, an artist from Sweden - Henrik Silver - is a brilliant mind manipulator and he claims he can "borrow" anyone's identity in just 10 minutes. Illusionist from Bulgaria - Rosen Dimitrov – usually performs his escape tricks from a flying balloon, but this time he will land on ground to please "Olybet MagicMania" guests. This event is unique also because entrance is free of charge, from 18 years of age.

The charming Agnese Zeltiņa, who has its own special view of the magic arts, will be also in jury team this year.

Illusionists Pecolli have promised several surprises during the evening, as, for example, „Olybet MagicMania” guests will have an exclusive opportunity to become magicians for a moment.

During the evening, guests will be able to enjoy the magically shocking performances by the illusionist legend from Switzerland - Roberto Giobbe. He is one of the greatest world experts in magic, as well as the author of encyclopedias about the magic and countless books. He has performed in many prestigious events in the world as guest of honor, therefore we are happy to have this exclusive opportunity to see him in "OlyBet MagicMania" in Riga.

The event will be hosted by illusionists Pecolli.

As of September 2016, OEG in Latvia owned 1638 gaming machines and 28 gaming tables. OEG employs 941 workers and is a socially responsible enterprise whose activity has been appraised by it’s inclusion in the so-called State Revenue Service’s “white list”.